I have read it at 20 Minutos. It is not the most reliable news outlet; moreover, the sources are not mentioned, but the information is, nevertheless, credible. I translate the most relevant parts to English:

According to antiterrorist sources consulted by 20 minutes, eight Jihadist groups have already settled in Spain and are located mostly in Catalonia, Madrid, Andalusia and Valencia.

Their threat is real, since most of these sleeping cells «can be activated at any time and perpetrate criminal attacks».

Three of these groups have a remarkable appeal among the Moslem community in Spain, especially among the young men that the National police defines as «second generation”, that is, children of immigrants born in Spain, with higher education and western lifestyle. They do not seem to be radical Islamists. [This paragraph just repeats conventional info. Moreover, there is not yet a “second generation” of Muslim immigrants in Spain]

The first of these groups is Al Qaeda for the Maghreb, the former Salafist Group for Preaching and Combat. It has been responsible for the last big terrorist attacks in the north of Africa; in their statements they use to call for jihad in order to take back Ceuta, Melilla and Al Andalus. Spanish Police continues to follow their track in Catalonia.

The second group is the Islamic Combat Group of Morocco (GICM), detected in Madrid and Catalonia. They are the authors of the 11-M attack. [The responsibility for the attack has been never clear]

The third movement is linked with the ideological group Takfir Wal Hijra (Anathema and Exile), the most violent and radical movement of Islamic fundamentalism.

This group [seems to refer to Takfir Wal Hijra], which justifies crime to support Jihad, recruits mainly among young Pakistanis. As 70 % of the Pakistanis living in Spain are located in Catalonia, it is in that region where the Police focus their investigations.

The other five terrorist groups [“movements” in the original] operating in Spain are Salafia Jihadia (from Morocco, enthusiasts of Osama Bin Laden); Muslim Brothers (from Egypt, settled on the Levantine coast); Gamma Islamiya Egipt; Tabligh al Dawa (from India, located in Andalusia and Murcia), and finally Hiz ut Tahir (in Catalonia).

The antiterrorist police services estimate there are 3.000 uses In Spain visiting regularly Jihadi websites, generally in an anonym way, from cybercafés. These complement mosques and other religious sites in the dissemination of radical propaganda. Increasingly, jihadists translate their contents from Arabic into English; the first pages in Spanish have appeared recently.

Comment: The fact that Spain is one of the targets of the Third Jihad is not surprising. Muslims have the religious obligation to expand Islam -mostly political Islam; conversion can be forced later on in many ways- and in particular they have the compelling obligation to retrieve those lands on which Islam once ruled. Al Andalus –that is Spain, and not only the south of Spain, the modern Andalucía- was once under Mohammedan yoke and is therefore among the priorities of the Jihad.

The answer by Spaniards to this threat cannot be more discouraging. Spanish government withdrew its troops from Iraq immediately after the first terrorist attack, even if they were not combat troops. Their next initiative was the proposal of the Alliance of Civilizations. Spanish citizenship showed their spinelessness the day after the attack, flocking together in massive demonstrations with white painted hands and pathetic slogans like “Terrorism = Pain¨, “No more death” or “Death will not suppress your voices”. 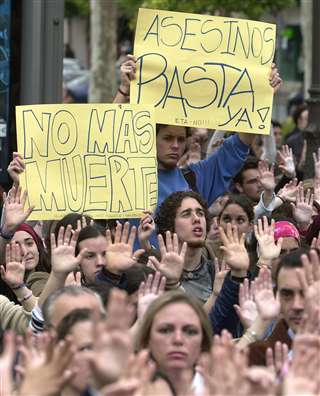 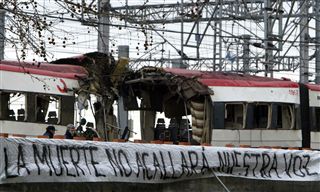 Will the next terrorist attack make them aware that withdrawal will never be enough but only total surrender? And will they defend themselves or will they blandly show their inoffensive with hands again?