It is not what one would call recent news in Spain, but I am sure that it will be useful to translate this curious case into English. Furthermore, it adds another piece of evidence to the thesis that Fjordman mentions in Eastern Europe and the New Threats to Freedom: “Multiculturalism as the continuation of Communism by other means”.

The Embajador en el Infierno (Ambassador in Hell, but not of the Devil), a friend blogger of mine, made an investigation after a controversial Raxen Report on Spain was issued in 2008 (INFORME RAXEN ESPECIAL 2008). I will translate some of his findings, together with relevant information published in Minuto Digital and Los Colaboracionistas. Minuto Digital is a conservative anti-immigration site, which has investigated the «Movimiento contra la Intolerancia» («Movement against Intolerance»). Los Colaboracionistas is an anti-immigration blog edited by Rutger von Blum, a pseudonym that refers to the most famous of almogavers (I promise to write on those interesting Christian mercenaries).

Movimiento contra la Intolerancia is basically a network of former communists specialized in seizing public funds. We will later see the current calculation regarding the amount of public funds that they have received.

Ibarra had been a member of the Spanish Communist Marxist-Leninist Party [PCE(ML)], which was dissolved into the Republican Convention of the Peoples of Spain. The PCE (ML) was formed in 1964 by a group of communist militants who rejected the policy of «national reconciliation» and “Euro communism” favoured by the Communist Party of Spain. At that time, the PCE (ML) followed the line of the Communist Party of China; until 1976, when the PC China entered the revisionist period. The PCE (ml) took then as a reference the Workers Party of Albania. That is, he has a far-far left background.

Moreover, in January 1971, at a congress held in Paris, the PCE (ML) decided to create the FRAP (Frente Revolucionario Antifascista y Patriota, Antifascist and Revolutionary Patriot Front) to carry out terrorist actions against the “fascist dictatorship of Francisco Franco”. It is not known if Ibarra was part of the FRP; in any case, he has not participated in any armed action.

Ibarra reinvented himself and went through a “short march” from the radical left to cultural, Gramscian Marxism. He created the Movimiento contra la Intolerancia. The change has paid him off very well. In 1998 he received the Gold Medal of the Madrid Region and in 1999 the Cross of the Order of Isabel la Católica by the Ministry of Foreign Affairs. Both by Spanish “conservatives”, the Partido Popular. The last one is the highest civil award by the Spanish Government, and an insult to the memory of the most successful Spanish ruler ever. And –I think I am correct- the first woman who ever actually ruled a country in human history.

Montserrat Moreno Lanza, Ibarra’s wife, in addition to being secretary general of the Movement Against Intolerance, is also president of the Centro de Iniciativas de Comunicación Onda Verde (Centre for Communication Initiatives Onda Verde). It is the old radio station Onda Verde, reconverted in an association dedicated to «sciences» –I understand it could be social sciences- according to its registration form. It has also been officially called Centro de Estudios, Juventud y Comunicacion Onda Verde, and this is how it appears in the Register Citizen Entities of the council of Saragossa (BOPZ 47, 27/02/2003). Onda Verde has received public funds for 355,109.63 € since 2002.

Montserrat Moreno also has a high-profile political affiliation. She was the number two on the list of the Greens-Ecopacifists (LV-E) in Madrid at Spanish local elections in 2003. And, in the General Elections 2004, she topped the list of the same party to the Congress. I translate her presentation by the party (only the cache page is now available): In the early 90’s several of Ibarra’s comrades from the PCE-ML, along with his wife, created «Jóvenes contra la Intolerancia» («Youth against Intolerance”), setting its operational headquarters in the apartment in Lavapiés neighbourhood (Madrid) where the couple lives. A number of meetings to define the political strategy of the group were held at the former headquarters of PCE-ML. The association was initially dedicated exclusively to denounce violence from the extreme right. Yep, former terrorists dedicated to denounce extreme-right violence.

«One only race, the human race»
Jóvenes Contra la Intolerancia, lacked real militancy. They focused on reports about the supposed existence of right-wing armed groups and began working as a lobby, supported by journalists with a similar political past. Despite having virtually no members they had a large presence in Spanish media.

When the Partido Popular came to power in 1996, Ibarra decided to change the name of the association, which becomes then the Movimiento. It had started to be funny having a person over 50 as the president of «Youths against Intolerance”. Most important, he almost totally abandons its focus on the “extreme right” and directs his speech against the terrorist group ETA. He also starts to include issues that had never been topical, such as gender violence. Nowadays, Ibarra has added to his portfolio homophobia, child abuse, rights of the Roma people, social integration of the disabled etc. He also changed then his appearance, abandoning the traditional black Lacoste polo and using jackets (no tie, of course). 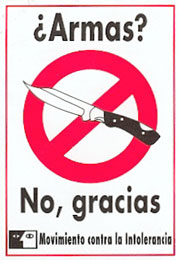 With the PSOE back in office after the 11-M terrorist attack, chameleon Ibarra readapts. Extreme right-wing groups, religious intolerance towards Muslims and racism are now the main points in the agenda. He has even seen in some media with his famous black Lacoste polo.

Why all those changes? The Movement against Intolerance is an empty shell, without militants, without any substantial structure or its own financial means; it can only live from subsidies by government.

An exhaustive analysis of the National and Regional Official Gazettes shows that Movement against Intolerance has received grants since 1995 for a total of EUR 3,042,601.83. This figure is a provisional calculation. Those interested in seeing the breakdown of this amount may download this PDF document (Spanish). The highest single payment received to date is EUR 220,000 from the Ministry of Labour and Social Affairs in the fourth quarter of 2007. Why an association without practically no members and no other deliverables than participation in debates and TV interviews is getting such a big a mount of taxpayers’ money?

In the list of members of the Foro Madrid de Diálogo y Convivencia depending on Madrid City Council (ruled by the Partido Popular), we can see that Ibarra is the representative and his wife the alternate. Who can deny the left has also strong family values? Please note also they are among Christian and immigrants’ associations.

The Movement against Intolerance publishes for times a year the Raxen report. This report is published in parallel in most European countries, and it is coordinated by the European Monitoring Centre on Racism and Xenophobia (EUMC) in Vienna. The INFORME RAXEN ESPECIAL 2008 was the subject a generalised outrage in the Spanish conservative blogosphere when it included as list of “racist” blogs. The report, which is a cut and paste job with very scarce added value, had taken the list of blogs from this aggregator. After the outrage caused the MCI manipulated the report and issued a new version without announcing the change. The eliminated a blog which simply reproduced news on immigrant crimes from Spanish press out a list of “xenophobic” blogs.

The Movement Against Intolerance –that is Mr. Ibarra and his wife- deserves an audit to check how the public funds they have received are used, but they not been investigated. They know nevertheless that they are under the scrutiny of the conservative blogosphere. Unfortunately, this is all we can do.