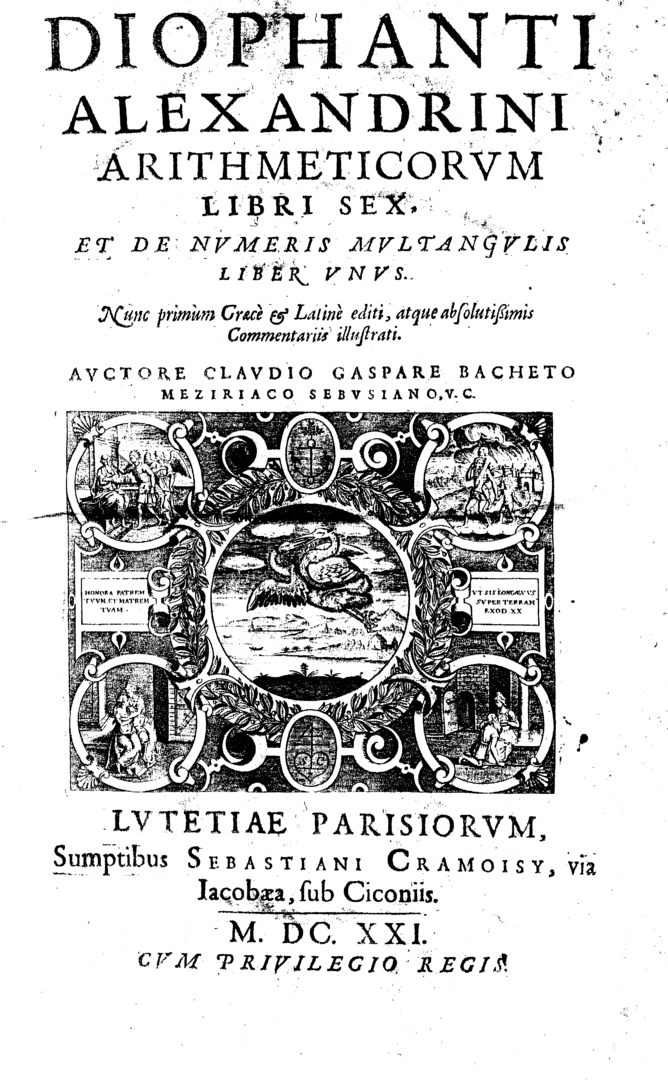 Diophantus of Alexandria is sometimes called «the father of algebra,» although the title is disputed. He worked in Roman Egypt in the third century of our era, but while he is usually assumed to have been a Greek, very little is known about his life. His collection of books known as the Arithmetica, a landmark work in the history of algebra and number theory with the so-called Diophantine equations, is believed to have been completed around AD 250. Dirk J. Struik explains in A Concise History of Mathematics, Fourth Revised Edition:

«Their skillful treatment of indeterminate equations shows that the ancient algebra of Babylon or perhaps India not only survived under the veneer of Greek civilization but also was improved by a few active men. How and when it was done is not known, just as we do not know who Diophantus was — he may have been a Hellenized Babylonian. . . . In Diophantus we find the first systematic use of algebraic symbols. He has a special sign for the unknown, for the minus, for reciprocals. The signs are still of the nature of abbreviations rather than algebraic symbols in our sense (they form the so-called ‘syncopated’ algebra); for each power of the unknown there exists a special symbol. There is no doubt that we have here not only, as in Babylon, arithmetical questions of a definite algebraic nature, but also a well-developed algebraic notation which was greatly conducive to the solution of problems of greater complexity than were ever taken up before.»

Arguably the most important mathematician who ever lived in the Islamic world was Muhammad ibn Musa al-Khwarizmi (ca. 780-850). He, or perhaps his ancestors, came from Khwarizm, the region south of the Aral Sea now part of Uzbekistan and Turkmenistan. He probably wasn’t an ethnic Arab and may have been born in Central Asia, yet he spent much of his life working as a scholar in Baghdad, synthesizing Babylonian with Greek methods. According to author David C. Lindberg, al-Khwarizmi’s Algebra «contains no equations or algebraic symbols, but only geometrical figures and Arabic prose, and it would not be recognized as algebra by a mathematics student of the twenty-first century. Its achievement was to deploy Euclidean geometry for the purpose of solving problems that we would now state in algebraic terms (including quadratic equations).» This book circulated in Western Europe and contributed in the long run to the development of a true symbolic algebra there.

One Latin manuscript begins with the words «Dixit Algorismi,» or «al-Khwarizmi says.» The word «algorismi» through some misunderstandings became a term referring to arithmetic operations and the source of the wordalgorithm. Some Sanskrit works and terms were introduced to Europe via Arabic translations. «Zero» derives from sifr, Latinized into «zephirum.» The word sifr itself was an Arabic translation of Sanskrit sunya, or «empty.»