An exclusive report by Justin Penrose in this weekend’s Sunday Mirror states that Abu Hamza, the hook-handed Islamist fanatic who has called on his supporters to kill Jews and any infidel, appears to be going potty in his jail, HMP Belmarsh.

He is now expected to do prison work, but the Sunday Mirror quotes a prison source who claims that Hamza believes cooking, cleaning and laundry duties are «peasant jobs».

He is also acting in a decidedly flaky way. The source stated: «He has become increasingly paranoid since he was sentenced at the Old Bailey. He thinks the whole world is out to get him and is convinced that he is going to be murdered in jail. He keeps on complaining that his cell has been bugged and that he is being spied on.»

A prisoner apparently asked Hamza if his family enjoyed living as parasites at the UK taxpayer’s expense, and the cleric responded by threatening to issue a fatwa and calling the fellow inmate «British scum». 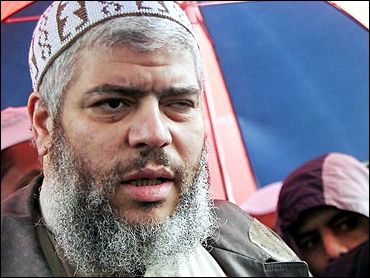 Hamza is demanding the right to wear his clerical costume in jail, rather than the standard-issue prison uniform. And he insists that no non-Muslim touches his food or laundry.